What’s New in Study Abroad Policy for Students in 2022?

A new era of global citizenship is now becoming available to those who choose to seize it. The previous decade has been turned on its head, and it’s not only when compared to locks from the Covid period. So, what’s New in Study Abroad Policy for Students in 2022?

Before beginning, the year 2021 has been a whirlwind for students hoping to study abroad. Deferred admissions were the first step, followed by a slew of policy adjustments. In the end, everything works out for the best.

In 2021, a more progressive administration committed to making it more straightforward for students to immigrate will welcome the United States. Thousands of our students are heading to the U.K. to take advantage of the Post-Study Work Visa, which experienced a surge of over three times this year. As the year came to a close, Australia reopened its southern border after a two-year closure. In the face of a competitive PSW and an intake that occurs in June rather than September-October for the U.K. and Canada, Australia is not going to miss any opportunity to reclaim students, their second-largest GDP growth engine!

A deeper look at the December 2021-January 2022 timeframe will help us better understand where we are.

Students have been shedding tears of joy. A new era of global citizenship is now becoming available to those who choose to seize it. The previous decade has been turned on its head, and it’s not only when compared to locks from the Covid period. As a result of these actions, so much has been accomplished.

Positive news, since it demonstrated a much-promised rebound from the 180,000 PRs in 2020. For the first time in its history, Canada has been able to secure its place as “the immigration destination.”

The United States will no longer require visa applicants to undergo obligatory interviews as part of the application process. The United States has stated that what was once known as “the required interview” would now be voluntary, with the choice remaining in the hands of the Consular Officer interview. This is a welcome and essential step forward.

Students with F & M type VISAs will have their validity extended until December 31, 2022, as a result of this action, which will apply to the majority of non-immigrant visas.

Open arms are extended to the Anglo-world (i.e. United Kingdom, Canada and the United States). Meanwhile, countries like Germany, the United Arab Emirates, and France are putting together the necessary legislation and infrastructure to join this club soon. Students’ “outlooks” are also altered due to these adjustments.

Previously, pupils relied on “lowest kilometer guidance,” or to put it another way, whatever counsel was most readily accessible in their immediate surroundings. This year alone, our platform LeverageEdu.com saw a 25-fold rise in organic traffic from 300,000 to 7.5 million visitors each month.

A lot may be gleaned from this one statistic regarding future students! It’s also possible that universities can’t adapt to changing student demographics. More than 40,000 students visited UniConnect virtual fairs from over 300 institutions. More than two-thirds of the universities in the U.S. have paid us for access to premium features that provide them more control over the caliber of students they accept into their programs and the kind of jobs they expect to be generated on campus.

Now, this is genuine change! Students – the global explorers – have discovered that healthcare has been added to their list of top priorities, just like the rest of the globe. Student confidence is built or eroded depending on how governments and leaders handle health emergencies. U.K. tripled its numbers while the U.S. lost more than one-third, not only because of their policies but because of other factors as well. Because of the trust-building steps taken by nations like the U.K. and Australia, the U.S. will have to work its way back from a deficit beginning in 2022.

In the end, the students win since they can attend the correct university and pursue the appropriate course of study in the right nation. For the first time, students may objectively assess the value of a college degree by looking at the kind of jobs they can expect to get upon graduation. Compared to its previous incarnations, the world of study abroad in this new, information asymmetries-broken, outcome-first state seems fantastic! 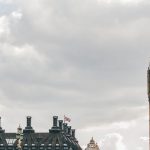 The United Kingdom is the most popular country globally: Report.News